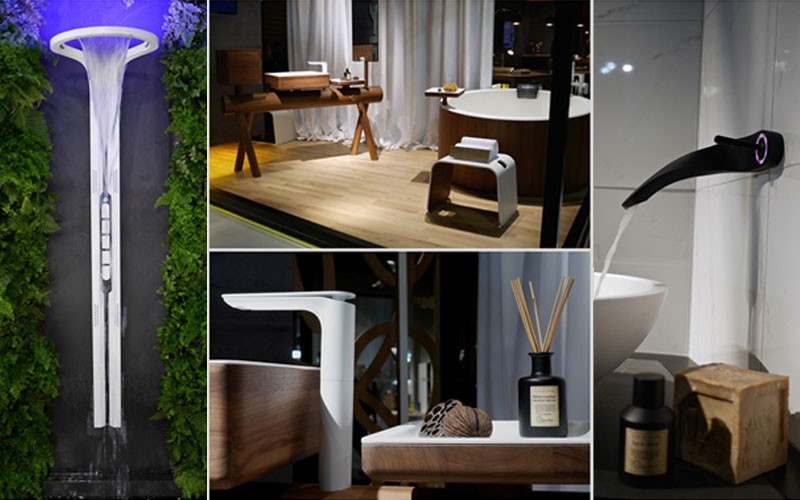 GRAFF's Exhibition at Salone del Mobile 2014 is a Stunning Success

The 2014 Salone del Mobile has come to a conclusion. GRAFF® would like to sincerely thank all of those that came out to see us in Milan! We were delighted to see many friends and admired design professionals, as well as take the opportunity to meet many new up and coming designers.

The introduction of the new image and design concept for GRAFF impressed the many design industry professionals who attended the event.  Much of this acclaim was in large part thanks to their new booth space which conveyed the idea of “home feeling”. The booth emphasized the contrast between the image of the “urban” or metropolitan atmosphere, represented by concrete walls, and the warmth of the home, represented by elements like the wood, the velvets, the green, or the linen curtains. According to Emanuela Tavolini, GRAFF’s Director of Sales in Europe, “The booth, like a home, was a welcoming environment in which visitors could rediscover themself. To alleviate the busy show atmosphere, in GRAFF’s booth, guests could indulge in Italian food delicacies, enjoy entertainment and jokes performed by a high class magician, refresh themselves with GRAFF’s perfumed wet towels in cotton pasha or even recharge their smart phones thanks to cables that were available in all sitting areas of the booth.”

The main product attractions that stood out were the two new furniture lines, Dressage and Expo.  In these collections, GRAFF capably combined the concepts of the architectural world with the bathroom. Dressage and Expo, signed by the designers Nespoli and Novara, were recognized as unique pieces that unite tradition, by using solid wood or oven-baked terracotta from Tuscany, with innovation, by using the high-tech DuPont™ Corian®. The simplicity of the shape and the richness of lush materials, combined in the two furniture collections, making the visit to GRAFF’s booth an experience to not miss.

Furthermore, the presentation of the Ametis Shower System, designed by Davide Oppizzi, as well as the display of a wide range of architectural finishes for the Ametis faucet, proved to be as exceptionally appealing for any visitor. Luna continued to be a benchmark identifying the excellence of GRAFF’s design, as well as all the faucet designs that continue to make GRAFF the perfect statement for any taste or need.

"It was an honor to be exhibiting at Salone del Mobile, amongst some of the top designers worldwide," said Chris Kulig, GRAFF's Strategy and Business Development Manager.  "The response we received from the introduction of our new bath and kitchen collections and new furniture line was exceptional.  We thank everyone for their enthusiasm and complimentary observations. It was a wonderful experience."

Check out all of our images from the show on our Facebook Page.