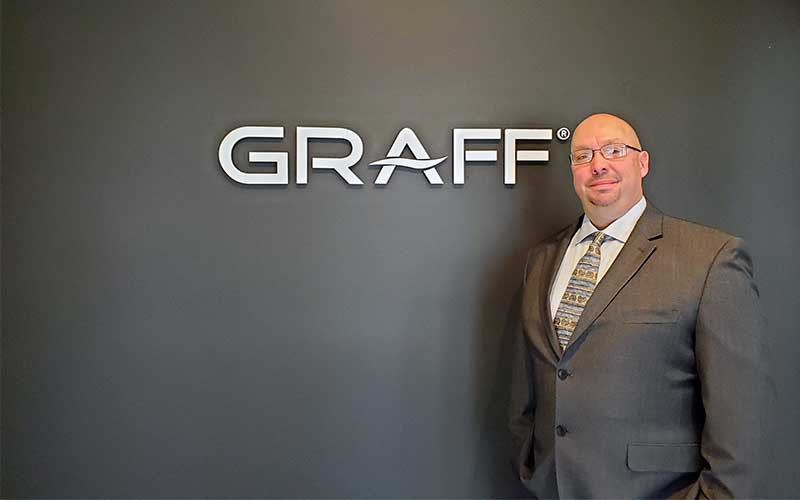 (Milwaukee, WI) March 13, 2020 – GRAFF, a global leader in decorative plumbing for the kitchen and bath, is proud to announce the additions of Eric Dietz and Johnn W. McDermott to its sales team. With over 40 years of combined experience, Dietz and McDermott will serve in the roles of National Sales Director and East Coast Regional Sales Manager, respectively.

“As GRAFF continues to grow, we’re always looking for talented individuals to join our team,” said Ziggy Kulig, President of GRAFF. “Eric and Johnn both more than fit that bill and we’re excited for them to bring their experience and industry knowledge to our sales team. We have no doubt they will both succeed at GRAFF.”

Prior to joining GRAFF, Dietz spent nearly nine years with Native Trails, makers of artisan-crafted sinks for the kitchen and bath, where he served as the Vice President of Sales. Before his time with Native Trails, he received his introduction to the faucet and fixtures industry during a four year stint as the National Sales Manager for Santec Faucet.

“This organization has been on my radar for several years because of their dedication to excellent designs, support of the design community, and overall commitment to excellence,” said Dietz. “I look forward to taking an already established, well-respected company to new heights with our combined efforts.”

McDermott is equally well-versed in the world of decorative plumbing having earned his stripes as the General Manager of Nikles USA, maker of luxury shower fittings, and National Sales Manager of Cifial USA, a plumbing and hardware manufacturer. He also had the opportunity to experience the larger picture behind home remodeling and construction, handling business development for Chicago-based home builder Dolby Development.

Dietz and McDermott will hit the ground running for GRAFF and are already working directly with their respective sales teams. For more information on GRAFF and its robust line of products, please visit GRAFF-Designs.com.

Headquartered in Milwaukee, Wis., and with locations throughout Europe, GRAFF is recognized globally for its trend-setting products and unique vision. Supported since 1922 by extensive plumbing and hardware manufacturing experience, GRAFF offers a wide range of contemporary, transitional and traditional styling. GRAFF’s commitment to creating cutting-edge, premium-quality fixtures is evident in each and every product. GRAFF employs more than 900 dedicated professionals and has control over the full production process, making it truly a vertically integrated manufacturer.