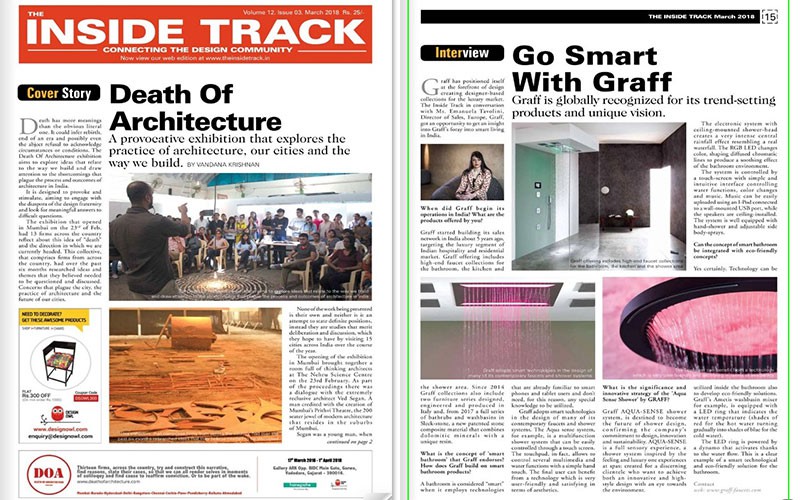 Interview with Emanuela Tavolini l The Inside Track

GRAFF has positioned itself at the forefront of design creating designer-based collections for the luxury market. The Inside Track in conversation with Ms. Emanuela Tavolini, Director of Sales, Europe, GRAFF, got an opportunity to get an insight into GRAFF’s foray into smart living India.

Q: When did GRAFF begin its operations in India? What are the products offered by you?

A: GRAFF Started building its sales network in India about 5 years ago, targeting the luxury segment of Indian hospitality and residential market. GRAFF offering includes high-end faucet collections for the bathroom, the kitchen and the shower area. Since 2014 GRAFF collections also include two furniture series design, engineered and produced in Italy, and, from 2017 a full series of bathtubs and washbasins in Sleek-Stone, a new patented stone composite material that combines dolomitic mineral with a unique resin.

Q: What is the concept of ‘smart bathroom’ that GRAFF endorses? How does GRAFF build on smart bathroom products?

A: A bathroom is considered “smart” when it employs technologies that are already familiar to smart phones and tablet users and don’t need, for this reason, any special knowledge to be utilized.

GRAFF adopts smart technologies in the design of many of its contemporary faucets and shower systems. The Aqua sense system, for example, is a multifunction shower system that can be easily controlled through a touch screen. The touchpad, in fact, allows to control several multimedia and water functions with a simple hand touch. The final user can benefit from a technology which is very user-friendly and satisfying in terms of aesthetics.

Q: What is the significance and innovative strategy of the ‘Aqua Sense Shower’ by GRAFF?

A: GRAFF Aqua-Sense shower system, is destined to become the future of shower design, confirming the company’s commitment to design, innovation and sustainability. Aqua-Sense is a full sensory experience, a shower system inspired by the feeling and luxury one experiences at spas; created for a discerning clientele who want to achieve both an innovative and high-style design with an eye towards the environment.

The system is controlled by a touch-screen with simple and intuitive interface controlling water functions, color changes and music. Music can be easily uploaded using an iPod connected to a wall-mounted USB port, while the speakers are ceiling-installed. The system is well equipped with hand-shower and adjustable side body-sprays.

Q: Can the concept of smart bathroom be integrated with eco-friendly concepts?

A: Yes, certainly. Technology can be utilized inside the bathroom also to develop eco-friendly solutions. GRAFF’s Ametis washbasin mixer for example. Is equipped with LED ring that indicates the water temperature (shades of red for the hot water turning gradually into shades of blue for the cold water).

The LED ring is powered by a dynamo that activates thanks to the water flow. This is a clear example of a smart technological and eco-friendly solution for the bathroom.