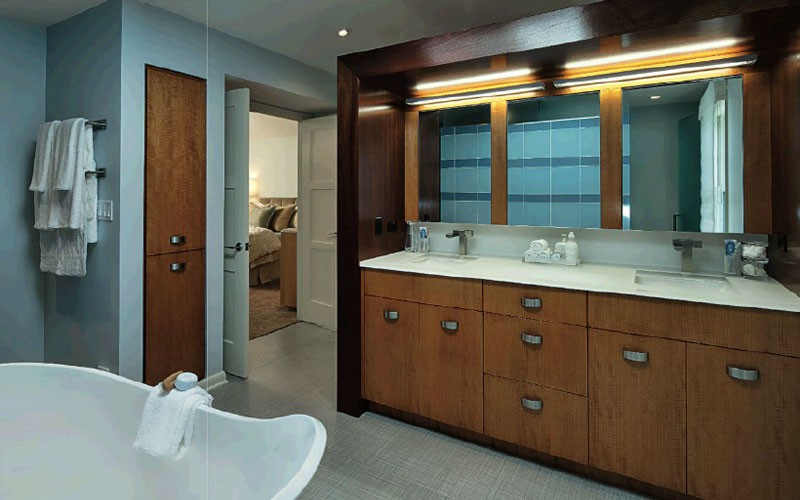 This refined bathroom remodel introduces a central dividing element to create distinct areas of use.

With the tub and cabinetry most often pushed to the walls of a bathroom, the central area can be left underutilized. However, there is an attractive way to put this dead space to good use, enhancing the room’s functionality.

This understated bathroom remodel, by interior designer Christine Julian, replaces a tired existing bathroom where a classic perimeter layout had left the heart of the large room a yawning void.

“My response was to introduce a new cabinetry wall elements, perpendicular to the original vanity and projecting in to the room – dividing it into two areas of function,” says Julian. “Given its high visibility from the bedroom and also from within the ensuite, this divider had to offer a warm natural aesthetic, offsetting the cooler tiled surfaces.”

The feature is finished in figured anigre veneer – the same wood used on all the cabinetry. Individual panels are framed in stained sapele, giving the entire element a furniture-like appeal.

The make-up counter is positioned on one side of this wall, with the vanity, tub, shower stall and toilet room on the other.

“I also repositioned elements on this side of the room. This involved moving the new slipper tub – pulling it forward, so I could tuck the toilet and shower cubicles in behind. The block-like appearance of the separating wall contrasts with the fluid lines of the slipper tub.”

The central wall ends just below the ceiling and the wall behind the bath seems to do the same – although here it continues up in clear glass. Cubicle doors to the left and right are also glass – framing the tiled wall. The interiors of the toilet and shower areas are finished in the same tilework.

“A cove ceiling meant we could not extend the central wall right up, although I would have finished it at this level anyway,” says Christine Julian. “Providing views that take in the entire ceiling adds to overall sense of spaciousness.”

The design also provides a degree of separation from the bedroom. A T-shaped end to the anigre wall helps screen the make-up area as well as the main vanity. The bathroom cabinets are set into the divider, with the joinery running up the sides and over the top of the unit, further shielding any clutter from the bedroom.

The natural feel of the rich veneers is continued on other surfaces. The make-up countertop and shower ledge are comprised of smooth white stones captured in clear resin. The effect is earthy yet refined – much like the aesthetic of the entire room.